You know why I call it that, or some variation, each week? Because I grew up in suburbia, in a suburb next to Schaumburg. Remember Married With Children? Wikipedia says it was set in Chicago, but that's almost a lie. It was set in a suburb that was supposed to show all that was horrible about suburbs; and it used Schaumburg as a model. I wouldn't concur that Schaumburg is all that nasty a suburb, but, then again, it is a suburb...

Long before Schaumburg's "founding" (read; development) in the 50s, it was a farm community of descendants of German immigrants. When I was young, there was a large feed store in town, and I loved going into there and smelling the smells. Grain is good! Often a horse or tractor would come down our suburban development lane, and it was really exciting for little girls who loved farm animals.

WGN, a Chicago radio station, would broadcast the farm report every day at lunchtime. I would come home from school every day for lunch (this is back when parents could still feed their children lunch at home) and snarf down a sandwich (in 5th grade, it was Spaghetti-Os every day; that's a story for another day.) I would listen to Orion (pronounced Ore-ee-en, for you astronomy types) Samuelson talk about pork bellies and soybean futures, and ask my mom why I couldn't join 4H. Or have a horse. Or a goat.

Now, I wouldn't say I dreamt of living on a farm, like some dream of being an astronaut or some such, but I really wanted to be where I am now. I don't mind the work of critters and land; it's the people who are uninvolved constantly pointing out how crazy I am to do it who make me a little nuts.

This week, I have lots to report. We have new additions!

Firstly, Henry has a new flock to care for. 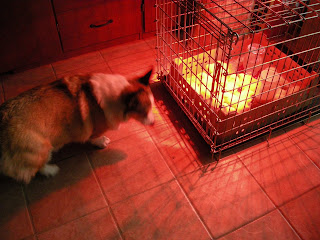 Last week a friend of mine called with some questions about ordering chicks. When we were almost done talking, I asked her if, when she ordered, she could also order 35 for me. I knew we needed some more meat birds this year, but hadn't gotten around to ordering yet.

Henry really likes them. He fusses over them alot. Should I tell him their final destination? 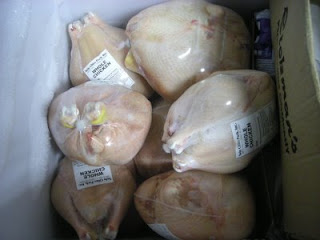 And Bessie is sure interested in something in this picture, isn't she? What is it, Bess? 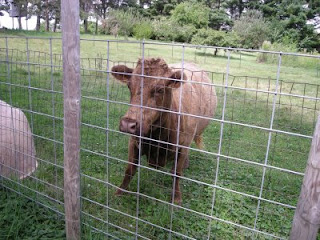 A new youngling! How fun! 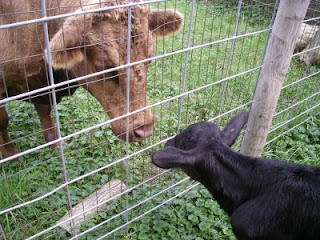 I had no idea how much she would like this little guy. He is isolated for a bit in a small pen with a shed. She has been cruising around that pen since we got home about 2 hours ago.


His name is Jr. Cheeseburger, a tribute to his size, heritage (part dairy, part beef) and destiny. We'll call him Junior. 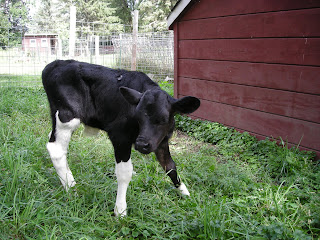 (I suppose he's too young for Bess?) giggle

Hahaha, your comment about Junior is priceless, I had to link it.

>>You know why I call it that,

You mean that why you call it the Saturday Farm Report isn't totally obvious to absolutely everyone? Gee, I think that shows what I heard on the radio while I was growing up...

Melody
Midwestern girl, wife, mom, and grandma gets moved to the Southwest in her husband’s job transfer. Hilarity ensues.